Approximately every second or third year we give away PlanEnergi’s ’Green Award’. This award, assigned in shape of a grant, is given as an award for development and motivation to individuals, groups or organizations which in an innovative, exemplary manner work to further the use of resource saving energy systems as well as environmental conservating systems.

In awarding the green award we wish to:

The award is granted on the background of recommendations given by PlanEnergi’s staff and board.

In the statutes for the independent consultancy, PlanEnergi, it is written that PlanEnergi must work to promote the use of ressource saving and environmentally conserving systems. This shall take place through commercial and informative activities. 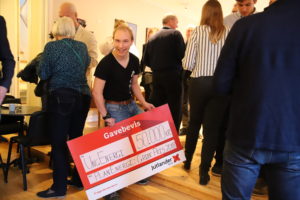 On November 30th 2018, UngEnergi, the youth organization of the interest organization SustainableEnergy (VedvarendeEnergi), received PlanEnergi’s Green Award. UngEnergi consists of 150 active volunteers and is involved in information campaigns on e.g. highschools, festivals and the annual political festival Folkemødet on Bornholm.

PlanEnergi aknowledges UngEnergi’s effort to raise awareness amongst the young generations on the importance of the transition towards sustainable energy systems.

Henrik Stiesdal has spent most of his life on the development and inventiveness in wind energy. Henrik’s first wind turbine design contributed to the establishment of “the Danish concept” which was used in wind turbine designs through the 80s. For 27 years he worked in Bonus Energy, now Siemens Wind Power, most recently as chief technology officer. Today he works as an independent with the further development of systems and components for future Elsam finds.

Henrik thanked for the price and chose this occasion to donate the sum to the developers of two websites: The website of the organization GrowForIt who plants trees to absorb CO2 and the website of Henrik’s own design of a floating foundation of an offshore wind turbine available to all interested parties.

“Jørgen Steen Nielsen has for nearly a generation as one of very few journalists stubbornly and with great commitment, maintained an ongoing debate and awareness of the effect on the environment due to our continued unrestrained consumption of fossil fuels ….,” was part of the reason to award Jørgen Steen Nielsen.